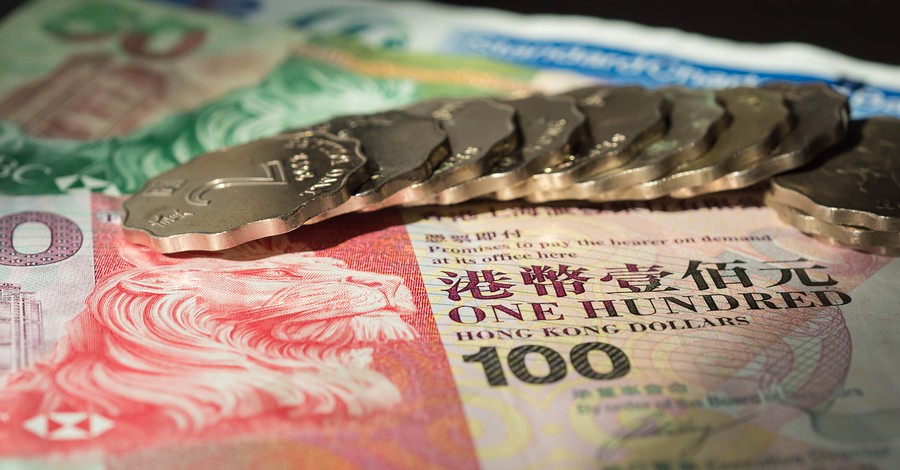 The Hong Kong dollar’s decades-old peg to the US greenback could be at risk, analysts warned last Wednesday, as local stocks took another pummelling in an Asia-wide rout. Shares on the Hang Seng Index plunged 3.82 percent to end near four-year lows, hit by fears over the health of the Chinese economy and weak oil prices, with mainland-linked chips taking a hammering.

The bourse has slumped almost 14 percent since the start of the year.

The sell-off has put huge pressure on the Hong Kong dollar, which has sunk to its weakest level against the US unit since 2007 as the city’s once alluring access to Chinese assets looks less attractive to investors.

This has led to a vicious circle whereby traders are seeing the falling dollar as a sign of capital outflows, which in turn leads them to continue selling stocks and hurting the currency.

The Hong Kong Monetary Authority is obliged to act by buying or selling the local dollar whenever it touches either side of the HK$7.75-HK$7.85 trading band against the greenback.

The HKMA has been forced to intervene to protect the peg on several occasions.

Among the biggest was in July and August 2014 when it stepped in 24 times, injecting a total of $9.7 billion into the financial system as the local dollar surged against the US unit owing to a flood of cash seeking access to China’s booming market.

Many economists trust that Hong Kong dollar is a victim of all the risk aversion across global markets. However, they believe that Hong Kong peg will stay in place because there are no better alternatives given the volatility we’ve seen with the yuan.

Bankers and analysts in general believe de-pegging from the US dollar is not an option. The only reason for the Hong Kong dollar to lose its peg to the US dollar would be to peg itself to the yuan and it’s too early for that.

Many analysts suppose that an unpegging today would mean the HKMA would not have to intervene, saving a lot of money.

A de-pegged Hong Kong dollar would have two choices for free floats. These are, being pegged to a basket of currency like the Singapore dollar, or being pegged to the yuan.

The Hong Kong economy is too small to adapt to a free float. A currency-basket system lacks transparency. A peg with the yuan will not happen in the near future as the currency is not yet freely convertible.

If the Hong Kong dollar were to be re-pegged to the yuan, it would need over 2 trillion yuan worth of assets to replace the HKMA’s US$340 billion in foreign reserves, which exceeds the amount of existing yuan assets in Hong Kong’s offshore market.

Why speculators are targeting the Hong Kong dollar, not the Yuan

The signs are there — an A-share market meltdown, a sharp renminbi devaluation, turmoil in the Hong Kong stock market and a falling Hong Kong dollar.

Speculators took short positions on the Hong Kong dollar, betting on an impending divorce from the US dollar, amid a round of competitive devaluations in other regional currencies.The theory was that the Hong Kong government would raise interest rates to prevent any capital outflow.But the increase in capital cost could sink the stock market and drag on the economy, so speculators shifted to shorting stock futures.

In the years after the financial crisis, Hong Kong entered a period of deflation.

The stage was set in the early 1990s when continuous capital inflow pushed up foreign exchange rates across the region and drove up home prices. People who got carried away by the sudden burst of prosperity forgot that it was built on sand. International speculators accelerated the speed of the market collapse.

Today, the Chinese economy is no longer the powerhouse it used to be. That’s one less excuse for investors to park their money in it. Money is flowing to the United States after it raised interest for the first time in eight years.

Meanwhile, the Hong Kong dollar has fallen to 7.83 from 7.75 against the US dollar, marking the end of one-way inflows. That followed a rally which saw the local unit gain 25 percent in the past 18 months.

Still, some continue to think deflation will be limited to the mainland and affect only Chinese companies. However, the renminbi devaluation in August created conditions that made imported deflation a possibility in Hong Kong. That has adverse implications for Hong Kong corporate earnings. If that grim prospect undermines household income, will property counters, let alone the stock market, remain attractive?

The rapid growth of the mainland economy flooded Hong Kong with a lot of liquidity, bringing the stock market a lot of really good days. The renminbi is not the target of international speculators who know that China can fight back with an enormous war chest backed by US$3.3 trillion in foreign exchange reserves. The Hong Kong dollar is.

The Hong Kong government holds nearly US$340 billion in foreign exchange reserves and is determined to defend the Hong Kong dollar peg to the USD.

It’s unlikely the Hong Kong dollar will depreciate but investors know the stock market will continue to experience some big shocks.

Economic and political risks are likely to increase if oil prices continue to fall. If prices fall below US$20, oil producers and new energy firms could go bankrupt.

Central banks in China and the US will step back from any more market intervention. If the Hong Kong dollar comes under speculative attack, all we have to rely on is the wisdom and capability of our financial officials.